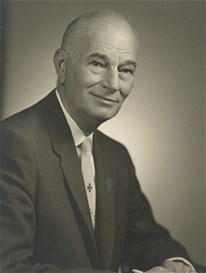 Oliver E. Clift Middle School was formerly dedicated in honor of Oliver Clift on September 24, 2009.  Born to Marvin and Hattie Clift on April 15, 1901, Oliver E. Clift was the youngest of three boys and grew up in Waxahachie, Texas on College Street. He attended both Central Ward and Ferris Ward from first through seventh grade and went on to attend Waxahachie High School in the historic T.C. Wilemon building. An avid baseball player, Mr. Clift was a member of the 1920 Waxahachie baseball team who went on to win the state title. Upon high school graduation in 1921, he went on to play baseball for the University of Texas under the direction of famed coach D.X. Bible.

The year 1924 was quite an exciting one for Mr. Clift as he signed to play baseball for the St. Louis Cardinals and married his high school sweetheart, Nelle Owen. After a one year stint with the Cardinals, Mr. Clift returned to Waxahachie where he became a cotton buyer and worked for the C.L. Penn Cotton Office. He remained with C.L. Penn until the mid 1940’s. It was during this time that he served as a member of the Waxahachie I.S.D. school board as both of his daughters, Gretchen and Dorothy, attended Waxahachie Public Schools.

During his tenure as a WISD school board member, he oversaw the expansion of Central Ward and its renaming to Marvin Elementary. He also worked to obtain raises for the teachers of the district at a time when funding was extremely limited due to the Great Depression. Perhaps one of the major highlights during his time as a member of the Board of Trustees was that of the 1945 Exhibition Baseball Game. In order to stimulate interest in Waxahachie baseball once again (baseball had been discontinued during World War II), Mr. Clift helped to not only organize an exhibition game in which the current 1945 WHS Baseball Team took on the “Old Timers,” but he also played in the game. The “Old Timers” included professional baseball players Dizzy Dean and Paul Richards for which Richards Baseball Park is named. True to his love for the game, Mr. Clift and the “Old Timers” won!

In addition to serving on the Waxahachie ISD school board, Mr. Clift was also an active philanthropist for the City of Waxahachie. He served as mayor of Waxahachie for eight years and was the last mayor to be elected by his constituents. Mr. Clift loved all things Waxahachie and served as president of the Waxahachie Chamber of Commerce in addition to a number of other chamber committees. For three decades he served on the industrial committee where he was instrumental in bringing businesses and industries to Waxahachie – one of which was Owens Corning.

In 1950, Mr. Clift went to work for Citizens National Bank of Texas where he served as Executive Vice President and CEO until his death in 1970. His natural ability to work with people also enabled him to serve as President of the 5th Banking District of Texas.

On a personal level, Mr. Clift loved the game of baseball. He was known for renting a television set during the World Series every year and placing it in the Citizens National Bank lobby so all of the customers could enjoy the game. He loved to play dominoes as well as checkers and enjoyed raising cattle. He was also an avid Texas Longhorn fan. In the afternoons, he loved to hear his girls play the piano and sing the popular songs of the day including “Peg O’ My Heart” sung by Red Nichols, “The Waltz you Saved for Me” sung by Wayne King and “Sonny Boy” sung by Al Jolson.

For the City of Waxahachie, the first part of the twentieth century is filled with a rich history. During this time, the name of Oliver E. Clift can be connected to the accomplishments of the community. His commitment and dedication to the children of Waxahachie I.S.D. and fellow Waxahachie citizens will forever be remembered in the pages of history.