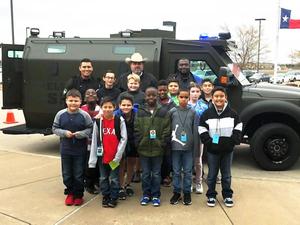 Campus security officers play a significant role on campus keeping students and staff safe. Other social responsibilities come with the badge as well to ensure students always have someone to turn to.

Clift Elementary security officer Jorge Jacquez has immersed himself in the campus culture and implemented several programs to create positive relationships with students and help them grow as individuals.

His primary initiative is the safety of the campus and making sure everyone feels safe, but also creating positive rapport with the students.

Officer Jacquez started his journey at Clift Elementary in February and immediately played a meaningful role on campus. Each Clift staff member has at least five designated mentees that they advise throughout the school year. Some students do not have a parent at home to encourage them to work harder, and Officer Jacquez attempts to inspire everyone he comes in contact with, whether it comes to grades or life.

When other students received word that Officer Jacquez rewarded his mentees with treats and stickers, more and more students went to him for motivation.

“I think it’s very important to have someone with a badge to establish that rapport with them because, at the same time, you’re letting them know police officers or anyone with a badge is not always a bad person,” Jacquez said.

In the mornings, Officer Jacquez starts the day with a supportive high five as students arrive at school. His actions contribute to the positive culture on campus, as well as the Safety Patrol program. Safety Patrol is a popular program at schools that allow students to assist with the drop-off and pick-up of their peers.

“When I was growing up, Safety Patrol was monitoring the hallways and the restrooms, and I was part of it,” Jacquez noted.

The Safety Patrol program had never been implemented at Clift until Officer Jacquez came on board. The safety patrol consists of fourth and fifth-grade students. These students typically arrive at school first, in time to put on their safety vests to greet their peers and assist them in exiting their vehicles.

Another group started by Jacquez is the flag crew, which consists of two fourth-grade and two fifth-grade students. These students are responsible for properly raising and lowering the outdoor flags daily and putting them at half-staff when needed.

“On Veterans Day, we did a whole ceremony out there, and our veterans came out. I put my uniform on, and they did an awesome job," Jacquez detailed. "Even the veterans were like, ‘Man, these kids are sharp.’”

He continued, “They loved putting up the flag with respect.”

Clift students break out into clubs once a month and rotate between clubs every few months. Jacquez is the advisor to the Clift Police Academy, a program that was revived by the security officer.

The overall focus of the club is to educate students on different law enforcement agencies. But not just anyone can get into the club. Students fill out an application that is similar to one a Waxahachie officer would complete. Once a student is accepted into the club, they sign a pledge and receive their Clift Junior Police Cadet badge. After three months of the program, students then receive a certificate of completion.

Through the club, members are exposed to law enforcement officers, their working environments, and the equipment they use to do their jobs. Jacquez noted Ellis County Pct. 3 constable Curtis Polk Jr. plays a large part in having law enforcement come out to the campus or welcome students in their facilities.

So far, students have experienced the K-9 unit for Waxahachie Police Department, a forensic team, and most recently sat in a Bat unit vehicle owned by the Ellis County Sheriff’s Office.

Junior cadets learn the repercussions of bad decisions, gain respect for those behind the badge, and explore careers while in the club.

Implementation of these programs is sparked by Jacquez's passions for law enforcement and his history serving in the military.

Jacquez served four years as a military police officer for the U.S. Army in his hometown of El Paso. He then worked four years as a juvenile detention officer for El Paso County. He is currently on a six-year term with the National Guard and is in his third year. If called upon by the president of the United States or governor of Texas, Jacquez is required to immediately serve in the capacity.

The Texas governor did request Jacquez’s services in Houston when Hurricane Harvey hit. Jacquez has been called for other assignments but is not required to go at this time since he is enrolled in college.

Jacquez used to work part-time as a security guard for Southwestern Assemblies of God University and finds himself still helping out here and there. He is currently taking classes at SAGU to earn his bachelor’s degree in criminal justice. He aspires to eventually receive his master’s and doctorate degrees as well.